TEHRAN (defapress) – The Chief Commander of the Islamic Revolutionary Guards Corps (IRGC) said the elite force’s Aviation has reached self-sufficiency in the field of defensive tools and equipment.
News ID: 81590 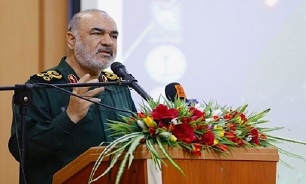 “IRGC Aviation is now fully capable of providing its needs in the field of modernization and overhaul of the squadrons,” Major General Hossein Salami said on Monday in a ceremony at the Fat’h Air Base near Tehran.

During the ceremony, attended by a number of IRGC commanders, the force unveiled a laser-guided missile system that will be installed on the IRGC helicopters.

Major General Salami pointed to the vital role of IRGC Aviation in maintaining the country’s security, adding, “The force has experienced considerable progress in the field of offensive, transportation and logistic helicopters.”

The commander of IRGC Ground Force, Brigadier General Mohammad Pakpour, who was also present at the ceremony, said, “All essential grounds for the application of helicopters in IRGC operations have been provided.”

“We are currently able to use such equipment in all operational zones,” he added.