Iran Vows Response to US Harassment of Passenger Plane over Syria 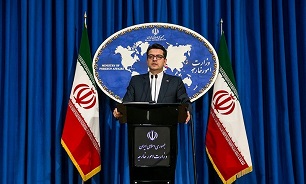 In a statement on Friday, Foreign Ministry Spokesman Seyed Abbas Mousavi said the dangerous move, for which the CENTCOM terrorist organization's spokesperson claimed responsibility, is a violation of international aviation law and a disruption of regional peace and security.

He also described as ridiculous CENTCOM spokesperson's claim that the American warplanes were conducting a "standard visual inspection" of the Mahan Air passenger plane at a safe distance during their "routine air mission" near Syria's al-Tanf airbase, saying the move comprised a series of violations.

"Both the presence of US troops in Syria and the air missions of their warplanes were illegal. More importantly, no one has allowed the United States to inspect passenger planes in the sky using its military fighters," he added, according to the Foreign Ministry’s website.

Mousavi also noted that "such an act is illegal, dangerous, and an instance of playing with the lives of innocent people, especially because, contrary to the claims made, the safe distance has not been observed at all."

"The Islamic Republic of Iran will pursue the US act by referring to international legal bodies, especially the International Civil Aviation Organization (ICAO), and will not allow the United States to mock all international laws with such bullying behaviors,” the spokesman underlined.

He warned the US and Israeli regime against any new adventure in the region, saying the stability and security of the West Asia region should not be used as a plaything for US elections.

"The Islamic Republic of Iran will not leave unanswered any hostile move against the Iranian nation, and will show decisive and appropriate reactions to any unwise move," he concluded.

A video posted on Friday by Iran’s IRIB news agency showed a jet from the window of a plane and blood on the face of a passenger – reportedly as a result from an injury sustained during the sudden altitude change.

The IRIB initially reported a single Israeli jet had come near the plane but later quoted the pilot as saying there were two jets which identified themselves as American.

The pilot of the passenger plane contacted the jet pilots to warn them about keeping a safe distance and the jet pilots identified themselves as American, the IRIB reported.