TEHRAN (defapress) – Iranian defense minister said on Thursday that the country's defense progress in the last four decades is not comparable to any other period.
News ID: 81831 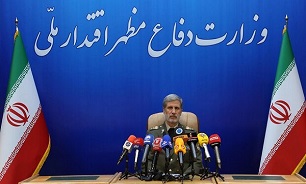 Making the remarks during a ceremony held on Thursday to unveil the latest achievements in defense sector, Hatami said: Iranian defense industry , which is considered as the fundamentals of military self-reliance and is one of the main requirements of the country's authority, is now a mature one with 770 various product groups that can supply the demand of the Iranian Armed Forces in wars.

As reported, in a Thursday ceremony which was attended by President Rouhani the latest achievements in the defense sector were unveiled.

Hatami informed on Wednesday that a production line and an exhibition would be inaugurated today.

"The production line for 'Owj' jet engine of Kosar fighter jets will be unveiled," he said Yesterday.

"A 4th-generation turbojet engine, which is lightweight, will also be unveiled," Hatami added then.

The homegrown engine, installed on modern drones, can be regarded as a major improvement in this sector, he said.

During the said exhibition, as he said, various Iranian drones would be showcased.

He also informed that two missile-related products would also be unveiled on Thursday.