TEHRAN (defapress) – Iranian President Hassan Rouhani says all of the Iranian products in the field of defense are developed based on the country's 'deterrent strategy'.
News ID: 81832 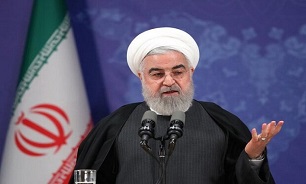 In his remarks addressing the unveiling ceremony of 'Martyr Haj Qasem ballistic missile' and 'Martyr Abu-Mahdi cruise missile' via video conference on Thursday, Rouhani underlined the role of drones in conducting various military missions and said, "Drones are the safest and cheapest tools to be used in various military operations."

He, accordingly, urged the Iranian defense ministry to make scientific and technical investments on the development of home-grown drones.

The President added in the past five years, Iran could manage to improve its international rank in the defense sector from its previous 23rd to its current 14th.

He underscored that all the researches, products, and efforts of the Islamic Republic rely on the improvement of its defense power and deterrence strategy.

"We do not want to occupy a place or harm a nation," he noted, "Our neighbors must be sure that Iran's defense power will be used in their favor. We will use our defense power for the benefit of our friends. We have never started a war in history, especially after the revolution."

Hatami said, "Iranian defense industry, which is considered as the fundamentals of military self-reliance and is one of the main requirements of the country's authority, is now a mature one with 770 various product groups that can supply the demand of the Iranian Armed Forces in wars."

As he described, in the missile sector, deterrence power is a significant factor and today, having the Abu-Mahdi cruise missile unveiled Iran has reached above 1,000 range.