TEHRAN (defapress) – Russian Foreign Ministry on Saturday said that the United States has chosen the wrong and erroneous track for settling difference with the Islamic Republic of Iran over its nuclear program.
News ID: 81843 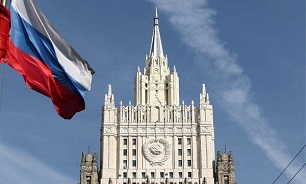 While lashing out at the US attempts for the implementation of the snapback mechanism, the Russian Foreign Ministry emphasized the need for dialogue with the Islamic Republic of Iran.

The path of escalation of tensions around Iran, which was chosen by the United States, is erroneous and dead-end, and Moscow calls on Washington to switch to dialogue with Iran instead of threats, the Russian Foreign Ministry said in a statement, Sputnik reported.

"The United States continues dangerous maneuvers in the UN Security Council in the hope of implementing its own anti-Iranian ideas. Having failed with the draft resolution on an indefinite arms embargo against Iran, which was decisively rejected by the Security Council, they now began to besiege the UN leadership and the chairman of the Security Council, seeking recognition of the allegedly retained US right to use the mechanisms stipulated by UN Security Council Resolution 2231 and the Joint Comprehensive Plan of Action for the settlement of the Iranian nuclear program (JCPOA) to put pressure on Iran", the statement says.

The department recalled that "all this is happening" after the US administration officially withdrew from the JCPOA and for more than two years "grossly and shamelessly trampled on its own obligations arising from the decisions of the Security Council related to this document".

"The notification of the United States about the process of restoring the UN Security Council's sanctions resolutions on Iran, cancelled after the conclusion of the JCPOA in 2015 and allegedly brought into effect by them, cannot have the consequences that the Americans are looking for. Their tricks crash against reality: by doing so, they deprived themselves of the rights and opportunities to use the mechanisms provided for by the Action Plan and UN Security Council Resolution 2231", the ministry stressed.

"We are convinced that the path of escalating tensions around Iran is wrong and dead-end. We call on the United States to make a choice in favor of reasonable decisions, and not to deprive itself of the opportunity to reach agreements with Iran.”

Washington has announced plans to trigger the snapback mechanism to reimpose all the UN sanctions against Tehran — previously lifted under the Joint Comprehensive Plan of Action (JCPOA) — after failing to get the UNSC to pass a resolution aiming to indefinitely extend the arms UN embargo on Iran.