Deal with US means extension of Iraq’s occupation

TEHRAN (defapress) – A representative of the Al-Fath Coalition in the Iraqi Parliament said closing a deal with the US to keep the American troops in Iraq will not help preserve peace and stability in the country.
News ID: 81848 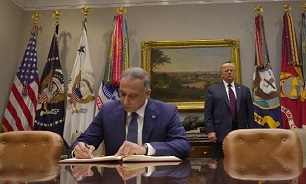 In an interview with Arabic-language Almaalomah news agency on Saturday, Abdul-Amir Najm reacted to Iraqi Prime Minister Mustafa Al-Kadhimi’s visit to the US, saying, "Al-Kadhimi must abide by the Iraqi parliament's decision to withdraw US troops from the country, but we are witnessing an agreement between Baghdad and Washington to keep US troops in Iraq for three years."

He stressed that the deal with the US to allow its troops to stay in Iraq is in fact the extension of occupation of Iraq and is not acceptable.

"The signing of such an agreement with the Americans is not within the authority of al-Kadhimi, and is a violation of the will of the Iraqi people and constitution."

Najm stressed that "national and political forces will not remain silent in this regard.

During a recent meeting with al-Kadhimi in Washington, US President Donald Trump claimed that the withdrawal of US troops from Iraq would take three years.