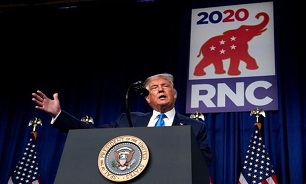 The nomination was announced in a GOP convention. Earlier, the convention renominated Vice President Mike Pence, and he thanked the delegates in person, according to Denver Post.

"The GOP convention is a crucial moment for Trump, who is trailing in national and battleground state polls and under intense pressure to turn the race around. Just 23% think the country is heading in the right direction, while 75% think it’s on the wrong path, according to a new poll from The Associated Press-NORC Center for Public Affairs Research," notes the report.

The Democratic Party had also officially nominated Joe Biden for the US presidential election in November.

The convention and the speeches delivered by Republicans at the convention were described as a ‘misleading defense’ of Trump’s political record by the NYTimes.

“Hours after Republican delegates formally nominated Mr. Trump for a second term, the president and his party made plain that they intended to engage in sweeping revisionism about Mr. Trump’s management of the coronavirus pandemic, his record on race relations and much else,” wrote the Times.

“At times, the speakers and prerecorded videos appeared to be describing an alternate reality: one in which the nation was not nearing 180,000 deaths from the coronavirus; in which Mr. Trump had not consistently ignored serious warnings about the disease; in which the president had not spent much of his term appealing openly to xenophobia and racial animus; and in which someone other than Mr. Trump had presided over an economy that began crumbling in the spring.”