TEHRAN (defapress) – In a joint statement, guarantor states of Astana Format Iran, Russia, and Turkey expressed opposition to the illegal seizure of Syrian oil by the US.
News ID: 81874 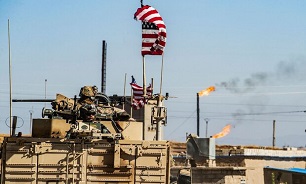 Here is the full text of the statement as published by the Iranian Ministry of Foreign Affairs:

The Islamic Republic of Iran, the Russian Federation and the Republic of Turkey as guarantors of the Astana format held on the margins the regular session of the Constitutional Committee`s Drafting Commission started on 24 August in Geneva the trilateral meeting, consultations with the Syrian delegates and the UN Secretary-General’s Special Envoy for Syria Mr.Geir O. Pedersen as a result of which they:

1. Reaffirmed their strong commitment to the sovereignty, independence, unity and territorial integrity of the Syrian Arab Republic and emphasized that these principles should be respected by all sides.

2. Reiterated their determination to combat terrorism in all forms and manifestations and stand against separatist agendas aimed at undermining the sovereignty and territorial integrity of Syria as well as threatening the national security of neighboring countries. They agreed to continue cooperation in order to ultimately eliminate DAESH/ISIL, Al-Nusra Front and all other individuals, groups, undertakings and entities associated with Al-Qaeda or DAESH/ISIL, and other terrorist groups, as designated by the UN Security Council, while ensuring the protection of the civilians and civilian infrastructure in accordance with the international humanitarian law.

3. Expressed their opposition to the illegal seizure and transfer of oil revenues that should belong to the Syrian Arab Republic. In this context, they condemned the illegal oil deal between a US-licensed company and the illegitimate entity as part of its separatist agenda.

4. Condemned the continuing Israel’s military attacks in Syria in violation of the international law and international humanitarian law and undermining the sovereignty of Syria and neighboring countries as well as endangering the stability and security in the region.

6. Emphasized the important role of the Constitutional Committee in Geneva, created as a result of the decisive contribution of the Astana guarantors and in furtherance of the decisions of the Syrian National Dialogue Congress in Sochi, in advancing the Syrian-led and Syrian‑owned, UN‑facilitated political process in line with the UN Security Council resolution 2254.

7. Welcomed the convening of the third meeting of the Constitutional Committee`s Drafting Commission on 24 August 2020 in Geneva and reaffirmed the readiness to support the committee`s work through continuous interaction with the Syrian delegates and the UN Secretary-General’s Special Envoy for Syria Geir O. Pedersen, as facilitator, in order to ensure its sustainable and effective functioning.

8. Expressed their view that the work of the Constitutional Committee should be governed by a sense of compromise and constructive engagement without foreign interference and externally imposed timelines aimed at reaching general agreement of its members that would enable the outcome to receive the widest possible support by the Syrian people.

9. Stressed the importance of the broader settlement process moving forward to increase humanitarian assistance to all Syrians throughout the country without, preconditions, politicization and discrimination to facilitate safe and voluntary return of refugees and internally displaced persons (IDPs) to their original places of residence in Syria as well as to build confidence and trust between the Syrian parties.

10. Reaffirmed the determination to hold the next International Meeting on Syria in the Astana format as soon as possible.