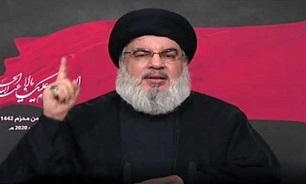 “Our region is divided today into two camps, right and wrong. Occupation, confiscating rights and terrorism are in one camp, and the rights of the Palestinian, Syrian, and Lebanese people are in the other camp,” Seyed Hassan Nasrallah said Sunday in a speech delivered on the day of Ashura, marking the martyrdom anniversary of Imam Hussein (AS), the third Shiite Imam.

Right is what these people and the governments that represent them portray and wrong is what the US regime bluntly portrays from stealth to domination and oppression, he said, according to Al Manar TV.

Victory in this battle between right and wrong in the region belongs to the axis of resistance, he added.

“As we have constantly achieved triumph in Lebanon and Palestine” and as Syria and Iraq defeated Daesh and Iran achieved victory in war and steadfastness, all the resistance fighters in Yemen will also come out triumphant, the Hezbollah chief said.

Elsewhere in his remarks, Nasrallah once against condemned the UAE’s deal with Israel for normalization of ties and its recent move to revoke a law that boycotted Israel.

“We condemn any call for peace with the Israeli entity,” he said.

Nasrallah highlighted Israeli humiliation of the Emiratis, saying when the Emirates claimed that their deal with Israel will result in halting annexation of Palestinian lands, the Israeli premier, Benjamin Netanyahu, instantly held a conference and assured that the deal will not stop any decision on annexation.

Later, the Hezbollah chief said, the UAE claimed that they will be receiving drones from Israel after the deal, but Netanyahu instantly held a conference and tweeted that no one in the region is allowed to have drones.

“So Israel did not even wait for a few days to deny the Emirati claims,” Nasrallah deplored, adding that the normalization deal was a free gift from the Emirates to US President Donald Trump and to Netanyahu in their worst political days.

The UAE officially canceled a law that boycotted Israel and prevented trade as well as financial agreements with Tel Aviv after signing a deal to normalize relations.

The official Emirates News Agency (WAM) made the announcement on Saturday, saying that Foreign Minister Sheikh Abdullah bin Zayed Al-Nahyan had issued a federal decree aimed at “abolishing the Federal Law No. 15 of 1972 regarding boycotting Israel and the penalties thereof.”

Elaborating on the decree and its scope of function, the news agency said companies and individuals in the UAE would now be able to sign agreements with firms or individuals residing in occupied Palestine.

“It will be permissible to enter, exchange or possess Israeli goods and products of all kinds in the UAE and trade in them,” WAM said.

Israel and the UAE on August 13 reached a deal that will lead to a full normalization of diplomatic relations between the two sides, in an agreement apparently brokered by Trump.

Anger is boiling in the Middle East and elsewhere over the agreement, with Palestinian leaders describing it as a “stab in the back” by an Arab country.