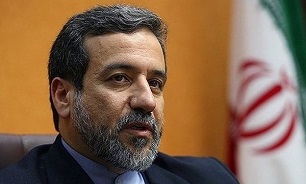 “The only basic solution to safeguard the JCPOA (the nuclear deal, officially known as the Joint Comprehensive Plan of Action) is for Iran to enjoy the benefits of the agreement with respect to the sanctions-lifting, which will materialize only through the adoption of practical and tangible measures by the JCPOA signatories,” Araqchi said on Wednesday.

He described as “constructive” the recent meeting of the JCPOA Joint Commission and praised the consensus of the remaining JCPOA signatories on the need to take a united action against the US’ reneging on its obligations stipulated in the historic accord.

Araqchi said that the JCPOA Joint Commission members “were unanimous in their belief that the US has ceased its participation in the JCPOA since May 8, 2018 and is no more considered a party to the agreement, and therefore cannot use the rights enshrined in the JCPOA, including those that would reinstate sanctions”.

The meeting of the JCPOA Joint Commission was co-chaired by Araqchi and European External Action Service Secretary General Helga Maria Schmid in Vienna, Austria, on Tuesday.

In relevant remarks late on Tuesday, Araqchi said that EU commercial dealings through the Instrument in Support of Trade Exchange (INSTEX) is not satisfactory for his country, adding that Tehran does not count on the system.

“It is now two years that the idea (of INSTEX) has started and it now exists and the first financial exchange has been made and a number of other financial exchanges are on agenda but the reality is that its effectiveness has proved to be much lower than our expectations,” Araqchi told reporters after participation in the Joint Comprehensive Plan of Action (JCPOA) Joint Commission meeting in Vienna.

He, meantime, underlined that Iran does not count on the INSTEX and does not trust and rely on the Europeans and INSTEX, adding that the country’s trade and commercial sector is making its activities via its own methods.

“If we can help the country’s trade through INSTEX, we will do it but we do not trust and rely on this system,” Araqchi said.

He also elaborated on the issues discussed in the Commission’s meeting, and said that members of Iran’s nuclear deal do not recognize the US as JCPOA participant and the United States is not authorized to snap back the sanctions or implement UNSC Resolution 2231.

The remaining parties to the JCPOA call the US efforts in New York to use snapback trigger mechanism ‘illegal and ineffective’ and believe that this measure cannot be effective, Araqchi emphasized.

Possible US moves were also discussed in today’s JCPOA Joint Commission meeting, he said, adding, “All these members unanimously emphasized that JCPOA is a major diplomatic achievement and should be preserved.”

Parties to JCPOA called for the full implementation of the deal and there are differences of opinion with regards to reducing Iran’s JCPOA commitments, Araqchi underlined.

“Naturally, we also want them (parties involved in nuclear talks) to fully comply with their obligations to lift sanctions but in today's meeting, it was decided not to get into these issues and to address the main issue which is the preservation of JCPOA,” he added.

The United Nations Security Council resoundingly rejected last month the second US bid to extend an arms embargo on Iran, which is due to expire in October.

In relevant remarks last month, Iranian Foreign Minister Mohammad Javad Zarif said it is by no means justifiable for the US to use Dispute Resolution Mechanism with regard to UNSC Resolution 2231.

"US recourse to Dispute Resolution Mechanism in 2231 has NO LEG TO STAND ON," Zarif wrote on his Twitter page.

"AmbJohnBolton has repeated today what he said on May 8, 2018, while National Security Advisor in the Trump administration," he noted, adding, "At least he is consistent—a trait notably absent in this US administration."

Zarif' tweet came in reaction to former US National Security Advisor John Bolton's article in Wall Street Journal where he criticized US' decision to trigger ‘snapback mechanism’ against Iran, saying, "The agreement [Joint Comprehensive Plan of Action]’s backers argue that Washington, having withdrawn from the deal, has no standing to invoke its provisions. They’re right. It’s too cute by half to say we’re in the nuclear deal for purposes we want but not for those we don’t."