Iran Pessimistic of US, Never to Forget Damages Caused by Sanctions 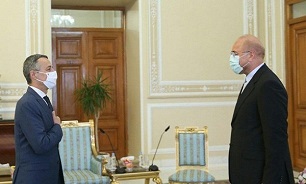 "Iranian people are pessimistic about the US due to its unilateral, oppressive and illegal sanctions, so the firm decision of the Iranian government and people is to strengthen the economy and internal technology to overcome these sanctions given our country's high capacity," Qalibaf said in a meeting with the Swiss Foreign Minister Ignazio Cassis on Sunday.

“Iranian nation will never forget the damages caused by the US sanctions,” he said, adding, "Iran is opposed to any kind of domination, therefore, the non-negotiation with the United States is due to their hegemonic view."

"Despite the fact that the recent positions of the Security Council were good, the non-compliance with the commitments in the nuclear deal is one of the bitter memories of the Iranians, so we are waiting for it to be compensated," the chief lawmaker stressed.

"Europe should not be influenced by US policies, especially since their moves have created instability and insecurity in the region," Qalibaf went on to say.

He also referred to the assassination of Islamic Revolution Guards Corps (IRGC) former Quds Force Commander Lieutenant General Qassem Soleimani, saying that his actions prevented the spread of terrorism, but the US assassinated him.

Qalibaf said that the forced normalization of relations between some countries in the region and the Zionist regime under the leadership of the Americans is not a way to solve the regional problems, adding, "These actions increase instability in the region, while Switzerland has always shown that it has taken steps towards world peace and humanitarian issues."

He also congratulated the 100th anniversary of the start of relations between Iran and Switzerland.

"In recent years, an agreement and a cooperation document have been inked by the two countries, the pursuit of the provisions of which will help reinforce their relations," the speaker noted.

"We must expand our relations in the economic, political, cultural, technological, scientific and educational fields, especially since recently an account has been opened between Iran and Switzerland for the exchange of medicine and food,” Qalibaf said.

Ignazio Cassis, for his part, said, "We hope that the celebration of the 100th anniversary of the start of relations between Iran and Switzerland will strengthen the relations between the two countries more than ever."

Pointing to the financial channel that has recently opened between the two countries, he added, "This financial channel contributes to the flow of Iran's revenues, especially in the field of food and medicine, which, of course, is a small measure and should be expanded."

"We will do our best to advance international discourse and strengthen bilateral relations.," Cassis highlighted.

In a relevant event, Ignazio Cassis voiced his country's willingness to expand scientific and tourism relations with Iran as the two countries are suffering from the negative impacts of the coronavirus disease.

Cassis made the remarks in a meeting with Isfahan Governor General Abbas Rezayee late on Saturday.

"Switzerland-Iran relations date back to 100 years ago and they have continued since the late 19th century with the signing of the peace and trade agreement between Tehran and Bern," the Swiss foreign minister said during the meeting.

He, meantime, announced that Iran and Switzerland will celebrate the centenary of their joint diplomatic relations.

The Swiss foreign minister underlined that Bern is ready to increase the level of scientific and tourism cooperation with Tehran.

Noting that peace and trade are two important factors in the development of the two countries, Cassis said that "we are here today to say that Switzerland has always sought peace and tranquility".

Iranian Foreign Ministry spokesman Saeed Khatibzadeh said on Friday that the official schedule of the Swiss foreign minister will begin on Sunday in Tehran after a short stop in Isfahan, the most important of which is the meeting on the 100th anniversary of the start of relations between the two countries.