Russia Trying to Help Syria Cope with Blockade Amid US Sanctions

TEHRAN (defapress)- Russian Deputy Prime Minister Yury Borisov said Moscow is trying to help Damascus break through an economic blockade created by Washington's new sanctions under the so-called Caesar Act, which deters any foreign companies and individuals from taking part in the reconstruction of the war-ravaged country.
News ID: 81969 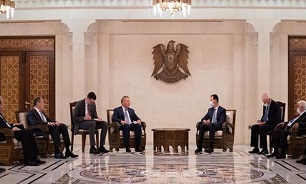 The sanctions aren't allowing “investment to be absorbed into the Syrian economy. This is, in fact, a blockade and a destructive position by the United States and Western countries. We are making joint efforts to break through the situation,” Borisov told reporters in Damascus on Monday as he took part in a joint press conference with Russian Foreign Minister Sergei Lavrov and his Syrian counterpart Walid al-Muallem, presstv reported.

Borisov noted that Russia and Syria are working to restore around 40 energy facilities in Syria, including offshore oil fields, emphasizing that the Damascus government cannot boost production and restore crude output as main oil fields are out of its control.

Syria reportedly produced around 380,000 barrels of oil per day before the war, but production subsided drastically after foreign-sponsored militancy plagued the oil-rich East.

Oil fields have largely been in the hands of US-sponsored and Kurdish-led militants affiliated with the so-called Syrian Democratic Forces (SDF).

The Russian foreign minister, for his part, denounced attempts by Washington and a number of its allies to choke Syrian people through economic sanctions and coercive measures.

Muallem, for his part, underlined that the US has resorted to imposition of various rounds of sanctions against Syria as it intensely dislikes the Damascus government’s positions vis-à-vis regional developments and the Israeli regime in particular.

He noted that Washington does not care about Syrian people and their immense sufferings, and views an independent Syria as opposed to its best interests.

Elsewhere in his remarks, Muallem pointed out that no pressure must be exerted on the Syrian Constitutional Committee, which began its first session in nine months in Geneva on August 24 as part of efforts to find a political solution to Syria’s conflict, to finish its work within a certain period of time.

“The Constitutional Committee will continue negotiations [with various parties] until it reaches a final agreement,” he said.

Muallem underscored that the Syrian presidential election will be held next year as scheduled regardless of the Constitutional Committee’s work.

“Damascus will not support any accord that contradicts Syrian constitution,” Syria's foreign minister stressed.

In another part of the press conference, Russian foreign minister said his country will continue to help Syria protect its sovereignty and territorial integrity.

“Russia will continue to support Syria's government and people in their efforts to protect the country's sovereignty and territorial integrity," Lavrov said, lauding Syria's "successful" battle against terrorism.

He added, “Syria has new priorities, including post-war reconstruction, after defeating terrorist forces.

Lavrov then praised Syria peace talks within the Astana format, stating that the negotiations have produced tangible results.

Moscow, Tehran, and Ankara have been mediating peace negotiations between representatives from the Damascus government and Syrian opposition groups in a series of talks held in Kazakhstan’s capital, Nur-Sultan, formerly called Astana, since January 2017.

Russia has also hosted parallel talks in the resort city of Sochi aimed at solidifying the three countries’ cooperation towards returning peace and stability to Syria.

Also in his remarks, Lavrov described differences among Russia, Turkey and Iran over the resolution of the Syrian crisis as “natural”, emphasizing that the three guarantor states of the Astana peace process do not want scenarios created for Libya and Iraq to be repeated in Syria.

“Russia is ready to host any initiatives aimed at national dialogue in any conflict-stricken country,” he said.

Earlier in the day, President Bashar al-Assad said he wanted to expand business ties with Russia to help Syria cope with new US sanctions.

The government is "determined to continue to work with Russian allies to implement signed agreements and to ensure the success of Russian investments in Syria,” Assad said during a meeting in Damascus with Borisov and Lavrov, Syria’s official news agency SANA reported.

The Russian delegation, for its part, reiterated Moscow’s support for Syria and a political settlement of its ongoing crisis regardless of attempts by certain Western states to block any initiative that would serve the interests of the Syrian nation.

Russia will continue to help Syria safeguard the country's sovereignty and territorial integrity, and to assume its regional and international roles, the delegates highlighted.