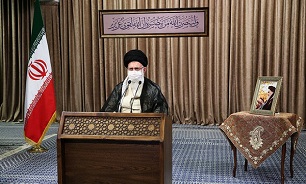 Ayatollah Khamenei made the remarks in a videoconference meeting with War veterans on Monday, on the 40th anniversary of the beginning of the Sacred Defense – the war Imposed by the former Iraqi dictator Saddam Hussein against Iran.

“Veterans and warriors who are honored today are those who gave up their comfort, life, family and future, and employed all their capabilities against the enemy,” the Leader said.

“They defended Islam, the revolution and honor. Some of them ascended [were martyred] and some stayed and finished the work.”

Ayatollah Khamenei noted that those, such the United States, who hired Saddam were hit hard by the revolution and were surprised by the braveries of the Iranian nation.

“Some were worried that a new identity based on religion and Islam would emerge in the region.”

Noting that the Islamic Republic had to counter many countries, he said, it was not just the United States, who backed the Saddam regime, but the Soviet Union at the time, NATO and Western Europe, and even Eastern European countries were supporting the Iraqi dictator.

“Documents found later revealed that the United States had pre-war agreements with Saddam.”

“Abundant arms and intelligence assistance was given to Saddam and the Baath Party; military convoys were transported to Saudi Arabia, Iraq and Kuwait via the UAE ports and were handed over to Saddam's forces,” he added.

This item is being updated…