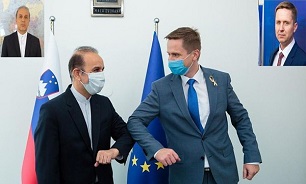 The two officials underlined the importance of setting up parliamentary friendship groups.

Zorčič, for his part, hoped that the coronavirus disease would be controlled and eliminated by discovering the vaccine.

He also hoped that sanctions would not harm the Iranian nation amid the virus spread.

In January 2019, Shafei, in a meeting with Slovenian Deputy Foreign Minister Dobran Božič, said that trade transactions between the two countries had increased by 23% in the first 9 months of the Iranian calendar year (started on March 21, 2018), adding that the two countries would hold joint economic commission in the near future.