Venezuela Denounces Multiform Aggression by US at UN

TEHRAN (defapress) – The president of Venezuela, Nicolas Maduro, denounced before the UN General Assembly the aggression in the media, political and economic spheres implemented by the United States against this South American nation.
News ID: 82103 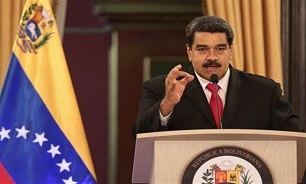 When intervening in the high-level debate of the 75th session of the multilateral organization, the president highlighted the resistance of the Venezuelan people to the effects of the unilateral coercive measures adopted by Washington as part of its policy for regime change, Prensa Latina reported.

Maduro asserted that the Bolivarian State was stripped of more than 30 billion dollars in assets abroad, in addition to suffering the intensification of the persecution of commercial operations in order to deprive the country of essential goods to guarantee social welfare of the population.

The head of state also rejected the support given by Washington to direct armed aggressions and terrorist plans against the South American nation, such as the frustrated paramilitary incursion of last May 3, called Operation Gideon, organized in Colombia with the advice of US personnel.

The United States must abandon the old practice of criminalizing those of us who do not subordinate ourselves to its designs in this world and maintain a policy of independence and sovereignty, Maduro asserted, calling the North American country the most significant threat to world peace.

Despite the permanent hostility of the US government and its allies, the president of Venezuela reiterated the commitment to promote respect for human rights, as well as the will to strengthen dialogue and international cooperation for the prevention of conflicts.

Likewise, he ratified the will to guarantee the health of the Venezuelan people in the face of the threat of the Covid-19 pandemic, which - he stressed - accentuated the existing inequalities in the world due to neoliberal policies.

In this sense, Maduro emphasized Venezuela's call to work for a new world geopolitics based on cooperation, solidarity, multilateralism, international law, aid and international support.

He also proposed the creation of a revolving fund for public purchases in the United Nations System to guarantee access to food and health products, financed with public resources, to allow access to these resources to the most disadvantaged nations affected by blockades. And discrimination.

The Venezuelan president recognized the efforts of countries such as Russia, China and Cuba, in confronting the pandemic and in the creation of an effective and safe vaccine against the SARS-CoV-2 coronavirus.

It also demanded the lifting of the economic, commercial and financial blockade imposed by the United States against the Cuban people, reiterating that it supports the call of the United Nations to stop the implementation of unilateral coercive measures.