Biden Predicts Trump Will Leave Office If He Loses Election

TEHRAN (defapress) – Joe Biden predicted that Donald Trump will step down if he loses his reelection bid in November, dismissing concerns that the US president may seek to hold on to power even if he’s voted out of office.
News ID: 82112 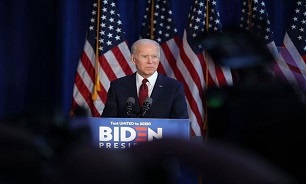 In an interview with MSNBC’s Stephanie Ruhle, the former vice president said that Trump’s efforts to sow doubt in the democratic process by raising concerns about voter fraud, particularly through mail balloting, amounted to a “typical Trump distraction.”

Biden’s remarks came after Trump twice refused to commit to a peaceful transfer of power if he loses reelection.

The White House has sought to play down his comments, saying that he will accept the outcome of a “free and fair” election, though Trump himself has repeatedly cast doubt on the trustworthiness of the eventual results.

“We want to make sure the election is honest, and I’m not sure that it can be,” Trump told reporters on Thursday. “I don't know that it can be with this whole situation — unsolicited ballots.”

Trump has for years pushed baseless claims of widespread illegal voting. He has also warned that an increase in mail-in and absentee voting during the coronavirus pandemic threatens the possibility of an accurate vote count, despite little evidence that vote-by-mail programs carry a substantial risk of fraud.

Biden told Ruhle that despite Trump’s claims of voter fraud, he does not believe that federal law enforcement will back up those claims should Trump try to call the results of the election into question.

“I don’t think he’s going to get the FBI to follow him or get anybody else to enforce something that’s not real,” Biden said.