Trump-Biden Debate Reveals Depth of Troubles in US 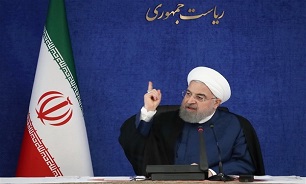 Speaking at a cabinet session on Wednesday, Rouhani said last night’s debate between the two candidates in the 2020 US presidential election indicated the tough conditions the United States is mired in.

Pointing to the “worst handling” of the coronavirus pandemic in the US, the worst unemployment rate in that country, and the escalating unrest inside the United States, Rouhani said Washington has also failed to achieve any victory in the foreign policy arena.

It is natural for the US to be seeking to divert the numerous problems from inside to the outer world, that’s why it is hatching plots against Iran, Rouhani added.

“Today, the US has adopted the most hostile, most criminal and most terrorist-like policies against the Iranian nation with a population of 84 million,” he deplored.

In comments in November 2018, Leader of the Islamic Revolution Ayatollah Seyed Ali Khamenei highlighted the diminishing influence of the US government in all areas of power, saying Washington has even discredited “liberal democracy” which is known as the basis of Western civilization.

There is a consensus among major international experts that the US power is dwindling in all areas, the Leader underscored, adding that, conversely, the Iranian nation is moving forward and has a bright future.