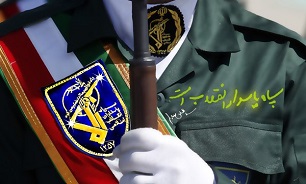 The IRGC Ground Force Quds Base said in a statement on Tuesday that two vehicles carrying its personnel were attacked by passengers of another car on a road in Nikshahr County of Sistan and Balouchestan province at 16:00 local time (1330 GMT).

The statement added that the attack led to the martyrdom of three IRGC members and injury of one.

“The identity of the assailants was under investigation,” it further said.

It said two of the assailants were also killed in the ensuing clashes.

No group has yet claimed responsibility for the assault.

Back in August, the IRGC Ground Force Quds Base arrested the main perpetrator of a recent sound bomb explosion in the city of Zahedan in the Southeastern province of Sistan and Balouchestan.

The Quds base, in a statement on Saturday August 8, announced that the main element who had planted a sound bomb on Sadra street in Zibashahr neighborhood in Zahedan a few days before, was captured.

The statement added that the necessary follow-up was underway to arrest other perpetrators of the terrorist act.

The sound bomb blast had taken place in Zahedan a few days earlier.

On August 5, members of a terrorist group planted an explosive device in a ditch on Sadra street of Zahedan and then called the police to report a fake incident. Immediately after the police forces arrived on the scene, the terrorists detonated the bomb, causing minor injuries to four policemen and damage to their car.