TEHRAN (defapress)- European stocks are expected to open in negative territory Wednesday as investors react to the US presidential debate, and gauge the investment landscape amid the coronavirus crisis.
News ID: 82151 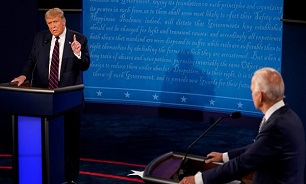 The first US presidential debate between incumbent President Donald Trump and Democratic nominee Joe Biden could be weighing on investor sentiment worldwide, with the two constantly exchanging sharp remarks in a face-to-face challenge.

Hardly a minute went by in the 90-minute brawl without one of the candidates angrily interrupting the other, whether on the coronavirus pandemic, the Supreme Court, the economy or anything else, including each other’s families.

Investors also reacted to the release of China’s manufacturing activity data for September which came in at 51.5, above analysts’ expectations and slightly higher than August’s 51.0 figure, according to the country’s National Bureau of Statistics. PMI readings above 50 indicate expansion from the previous month, while those below that figure signal a contraction.