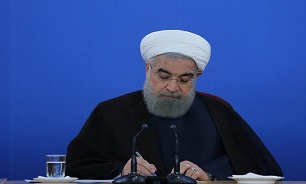 In his Sunday message, Rouhani felicitated Sheikh Nawaf al-Ahmad al-Sabah for the appointment adding that "I am confident that, as in the past, we will witness the ever-increasing expansion of friendly and fraternal relations between the two countries and the development of stability and security in the region."

During the meeting, Zarif offered condolences on behalf of Iranian President Hassan Rouhani to the new Kuwaiti ruler on the passing of the country’s late Emir Sheikh Sabah Al-Ahmad Al-Jaber Al-Sabah.

He also congratulated the new Emir and expressed hope that the bilateral ties between the two countries would flourish in the future.