TEHRAN (defapress)- A London-based war monitoring group said Turkish military units have hit the positions of Syrian government troops in the Eastern part of the country’s Northwestern province of Idlib with no immediate report of casualties.
News ID: 82201 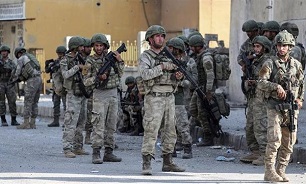 Earlier in the day, Turkish-sponsored militants had targeted the positions of Syrian army forces in a number of villages in Southern Idlib, including Kansafra and Sufuhon.

Ankara has been providing support to militants operating to topple the Damascus government since early 2011.

Last year, Turkey seized control of the border town of Ra’s al-Ayn after it launched a cross-border invasion of Northeastern Syria with the help of its allied armed groups to push Kurdish militants affiliated with the so-called People’s Protection Units (YPG) away from border areas.

Separately, US military forces stopped a convoy of Russian troops as they were on patrol in Syria’s Northeastern province of Hasaka.

The Russian patrol was intercepted and prevented from proceeding in the town of Rmelan on Saturday, according to the monitoring group.

Senior US officials have on occasions complained about Washington’s policies in Syria, arguing that the approaches of President Donald Trump’s administration have stuck American troops fighting a 'forgotten war' and guarding oil and gas resources there, while Russian troops are making advances and help the Damascus government recover after nearly a decade of militancy.

“It's a clusterf**k in Syria,” one top US intelligence official, who requested anonymity, told American weekly news magazine Newsweek last month, adding, “We don't have a strategy”.

Malcolm Nance, a former US Navy intelligence and counter-terrorism specialist, also compared the situation to another bloody quagmire for the Pentagon, and said the presence of US troops on the Syrian soil is a political game with little payoff.

“A few special forces supported by artillery and armor units are very much akin to 2002 in Afghanistan. It is now a forgotten war,” Nance said.

Moreover, Russian and Syrian joint coordination committees on the repatriation of Syrian refugees have denounced the presence of US troops on the Syrian soil, stating that such an illegal military deployment stokes new tensions in the Middle East.

The committees, in a statement released on September 3, cited the unlawful presence of US forces and militants affiliated with the so-called Syrian Democratic Forces (SDF) as one of the serious matters of concern in northeastern part of the Arab country, Syria’s official news agency SANA reported at the time.