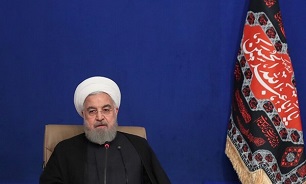 Rouhani sent a congratulatory message to Nawaf Al-Ahmad Al-Sabah on his appointment as the new Kuwaiti Emir and hoped that Iran and Kuwait would see more stable and secure region.

In a relevant event on Sunday, Iranian Foreign Minister Mohammad Javad Zarif met with new Kuwaiti Emir Nawaf Al-Ahmad Al-Jaber Al-Sabah, and sympathized with the country’s government and people over the departure of the late Emir, Sheikh Sabah Al-Ahmad Al-Sabah.

He also met and talked with his Kuwaiti counterpart Ahmad Nasser Al-Mohammad Al-Sabah as well.

Earlier, Iranian President Hassan Rouhani in a message on Wednesday hailed the role of the late Emir of Kuwait in regional balance and moderation.

In his condolence message to the new Emir of Kuwait Nawaf Al-Ahmad Al-Jaber Al-Sabah, President Rouhani expressed his condolences over the Late Emir's death and hailed his significant role in endorsing regional balance and moderation.

Also, on Tuesday, Iranian Foreign Minister Mohammad Javad Zarif extended his condolences over the death of Emir of Kuwait.

"The news of death of Emir of Kuwait, who drew a picture of moderation and equilibrium for Kuwait and the region, hurt our hearts," Zarif tweeted in Arabic language on Tuesday.

“We ask the God Almighty to bestow mercy on him and provide security, stability, progress and prosperity for the Kuwaiti government and its people in the shadow of the new government," he added.

Born in 1929, Sheikh Sabah is widely regarded as the architect of modern Kuwait’s foreign policy – having served as foreign minister for nearly 40 years between 1963 and 2003 – when he became prime minister, Al-Jazeera reported.

He became Kuwait’s emir in January 2006 after the death of Sheikh Jaber al-Sabah.

In August 2019, Kuwait acknowledged Sheikh Sabah suffered an unspecified medical “setback” that required he be admitted to hospital.

In July 2020, he flew to the United States seeking medical attention after undergoing surgery. A US Air Force C-17 flying hospital transported Sheikh Sabah from Kuwait to Rochester, Minnesota, home of the flagship campus of the Mayo Clinic.

The emir had his appendix removed in 2002, two years after having a pacemaker fitted. In 2007, he underwent urinary tract surgery in the United States.

When the emir was absent in the past, 83-year-old Crown Prince Nawaf al-Ahmad al-Sabah, the emir’s half-brother, was appointed acting ruler as per the country’s constitutional law. Sheikh Nawaf is an elder statesman who has held high office for decades, including the defence and interior portfolios.

Sheikh Sabah had pushed for diplomacy to solve regional issues, such as the continuing boycott of Qatar by four Arab nations, and he hosted major donor conferences for war-torn nations such as Iraq and Syria.

Kuwait television earlier interrupted regular programming to cut to Quranic verses on Tuesday, a move that often signifies the death of a senior member of the Persian Gulf Arab state’s ruling family.

His death comes as the nation continues to fight the coronavirus pandemic, which has infected more than 103,981 people and caused 605 related deaths in the country of 4.1 million. Its health ministry said more than 95,500 people have recovered from COVID-19.