TEHRAN (defapress)- Senate Majority Leader Mitch McConnell took a somewhat-rare shot at President Donald Trump and his White House on Thursday, saying he has not been to the now-coronavirus hotspot since August because he was worried about how the president and his team were handling the pandemic.
News ID: 82237 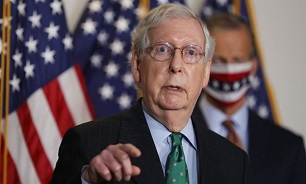 “I haven’t actually been to the White House since August the 6th,” the Kentucky Republican told reporters, adding,  “Because my impression was that their approach to how to handle this is different from mine and what I suggested that we do in the Senate, which is to wear a mask and practice social distancing," The Independent reported.

White House aides mostly shunned masks for months, taking cues from their COVID-skeptical boss – even though Trump told journalist Bob Woodward in February he knew the respiratory disease that has killed at least 212,000 Americans was mostly transmitted in the air and deadlier than the seasonal influenza.

Around three dozen White House aides have joined the president in testing positive for the virus since a September 26 event in the White House Rose Garden that featured a follow-on reception inside the mansion to announce Judge Amy Coney Barrett as Trump’s third Supreme Court nominee.

In the spring, McConnell prolonged Senate vote series to try to mitigate interactions between lawmakers and their staffs, to mixed results.

While senators were required to wear masks on the Senate floor, they continued huddling close together during votes to engage in the side discussions where deals are often struck in Washington.

In May, the Senate GOP resumed its regular schedule of in-person lunches with all 53 of its members. They have been eating boxed lunches — as opposed to serving themselves from the usual buffet — in a large hearing room in the Hart Senate Office Building instead of the much smaller space over in the US Capitol building often set aside for the luncheons.

The majority leader has mostly stood by Trump and been an ally, defending some of his most brazen and controversial policy moves, tweets and even most of his most explosive rally comments.

But he also has, at times, been willing to express his frustration with something Trump or his team have done or said. Thursday’s remark amounted to a message urging the Trump White House to alter their practices for combating the airborne disease.