New US sanctions another inhumane move against Iranian nation

TEHRAN (defapress) – Iran's ambassador and permanent representative to the Vienna-based international organizations condemned the latest round of sanctions imposed by the US against Iranian banks as another inhumane act against the Iranian nation.
News ID: 82247 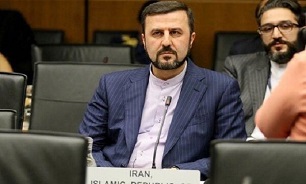 "The criminal actions of the US regime in threatening the lives of ordinary people through economic terrorism seem unending," Kazem Gharibabadi wrote in an Instagram post late on Friday.

“By now, this deviant American game should be known to everyone," he added.

He further called on the European countries to take actual steps against such unilateralism and hawkishness instead of merely expressing regret.

Gharibabadi added that Europe has a heavy responsibility in terms of countering US human rights abuses.

The US Treasury Department on Thursday imposed fresh sanctions on Iran’s financial sector, targeting 18 banks in an effort to further choke off Iranian revenues.

It claimed in a statement that the prohibitions did not apply to transactions to sell agricultural commodities, food, medicine or medical devices to Iran, saying it understood the need for humanitarian goods.

Tensions between Washington and Tehran have soared since Trump unilaterally withdrew in 2018 from the 2015 Iran nuclear deal struck by his predecessor and began re-imposing US sanctions that had been eased under the accord.