US New Sanctions, Propaganda Tool for Domestic Use

TEHRAN (defapress)- Iranian President Hassan Rouhani said the fresh US sanctions against Iran are only meant to serve domestic consumption, adding that the sanctions will fail to break the Iranian people’s steadfastness.
News ID: 82249 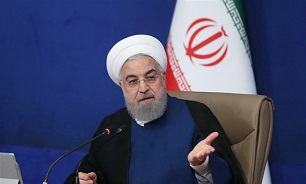 President Rouhani said in a phone call with the governor of Central Bank of Iran (CBI) Abdolnasser Hemmati on Friday that the US government's moves are within the framework of political propaganda pursuing domestic goals, noting, "Americans have so far done whatever they could against the great Iranian nation, but they cannot break the Iranian people's resistance,"

“All nations know that these actions by the US government are completely against international laws and regulations,” Rouhani went on to say, adding, “besides Washington's measures are quite inhumane in the coronavirus era and human rights claimants in the world should condemn it".

The US Treasury Department's Office of Foreign Assets Control on Thursday imposed sanctions on 18 Iranian banks and financial institutes in a move to bring the Iranian people to their knees.

The Trump administration decided to impose new sanctions on Iran's financial sector in defiance of European allies who warned that the move could have devastating humanitarian consequences on the country.

In relevant remarks, Abdolnasser Hemmati blasted the US for imposing sanctions on Iranian banks, and said that some of the sanctioned banks were handling imports of food and medicine and worked with foreign banks which still hold all the necessary waivers from the US government.

"Although in the past months we have been in dire need to provide medicine and food to the people due to the maximum pressure, so far we have not allowed any shortage to be felt in the country," Hemmati said.

He reiterated that from now on, the CBI along with the private sector will make every effort to supply medicine and basic goods needed by the people and will not allow more pressure to be put on the people in this area.

"This shows that the claims of human rights and humanitarianism by the leaders of this country are false and deceptive, and such actions will definitely be recorded in the memory of the Iranian nation," Hemmati added.