TEHRAN (defapress) – In a meeting with his Iranian counterpart, the governor of the Central Bank of Iraq said, “Iraq is trying to improve banking cooperation with Iran via adopting some mechanisms in order to resolve the current banking issues."
News ID: 82269 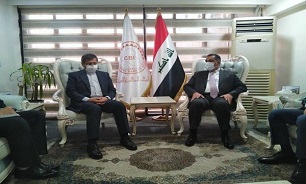 In this meeting, Ghalib Makhif stressed, “Iraq is trying to continue its banking cooperation with the Islamic Republic of Iran and use Tehran's experience in financial and banking affairs.”

“There are some mechanisms that can be used to strengthen banking and monetary cooperation between the two countries and resolve existing problems”, he said and added, “Forming a joint committee with the presence of banking and financial officials of the two countries is recommended in order to reach consensus in terms of resolving issues.”

Hemmati, Governor of the CBI, expressed hope that with the cooperation of his Iraqi counterpart and the efforts of the Iraqi officials, banking issues between the two countries will be resolved.

He considered the relations between the Islamic Republic of Iran and Iraq very important and effective and added that Tehran attaches great importance to the development of cooperation with Baghdad.

Heading a high-ranking banking and business delegation, Hemmati arrived in Baghdad this morning to meet with Iraqi officials, including Prime Minister Mustafa al-Kadhimi.