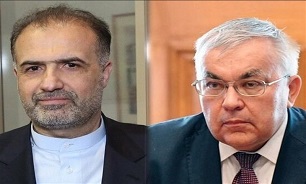 Kazem Jalali and Russian Deputy Foreign Minister Sergey Vershinin held a meeting in Moscow to discuss the Middle East issues, including settlement of the Syria crisis, the Russian Foreign Ministry said in a statement.

"Middle East issues were considered in detail, including the tasks of ensuring security in the Persian Gulf and promoting a comprehensive settlement in Syria based on respect for the sovereignty and territorial integrity of regional countries and non-interference in their internal affairs," the statement said.

Vershinin and Jalali discussed urgent issues on the UN Security Council agenda and issues of coordination in the sphere of protecting and promoting human rights, including in the UN Human Rights Council, it added.