TEHRAN (defapress) – Stating that Iranians will neither forgive nor forget the inhumane acts of some European states, Ali Bagheri-Kani said that the countries that have subjected the Iranians to the most severe sanctions cannot claim human rights.
News ID: 82289 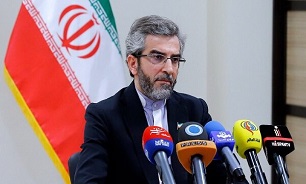 Judiciary’s High Council for Human Rights Ali Bagheri-Kani made the remarks in his meeting with Austrian Ambassador to Tehran Stefan Schulz.

During the meeting, the two sides discussed the potential for bilateral cooperation in the legal and judicial fields.

Referring to judicial innovations in the Islamic Republic of Iran, Bagheri-Kani announced the readiness of the Iranian judiciary to share its experiences with the Austrian judiciary.

He also referred to the behavioral and verbal contradictions of some Western governments on the issue of human rights, saying, "We call on the Western countries, which support the Zionist and Saudi regimes, to take human rights into account in their human rights policies, and not to always use their illegitimate interests as a criterion for dealing with human beings."

"The human rights approach of Western countries stems from their policies," he added, saying, "However, the principles of human rights of the Islamic Republic of Iran determine the policies of the country, and in this regard, despite the pressures of these countries claiming human rights, Iran proudly supports the oppressed nations, including Palestine and Yemen."

"The countries that have subjected the Iranian people to the most severe sanctions, without exception, and have seriously threatened their right to life and health, which are fundamental human rights, cannot claim human rights," Bagheri-Kani highlighted.

He noted that the Iranian nation will neither forgive nor forget the inhumane acts of some European countries.

Stefan Schulz, for his part, also announced his country's readiness to expand judicial cooperation with Iran.

"Austria and Iran have an extraordinary and historic relationship based on mutual trust," he said.

"No country has the potential for rapid economic growth like Iran in the post-corona era because no country like Iran has a young and active population with rich natural resources and the will to thrive."