Iran calls US unilateralism as real threat to human rights

TEHRAN (defapress) – Calling US unilateralism as a real threat to human rights in the world, Iran's representative in the Third Committee of the UN General Assembly criticized the relevant human rights bodies for inaction against US sanctions.
News ID: 82295 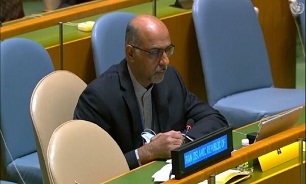 "The increasing unilateralism pose a real global threat to the protection and promotion of human rights," said Mohammad Zareian on Wednesday in the online meeting which was also attended by High Commissioner for Human Rights Michelle Bachelet.

"The impact and scope of the unlawful unilateral coercive measures imposed on the people of Iran have been exacerbated even during pandemic," he added.

"The US Government has targeted my fellow citizens, in particular, the most vulnerable among them, including women, children, the elderly and those in need of medical attention. This is nothing but an act of economic terrorism," he highlighted.

"My delegation reiterates its disappointment that as every aspects of the human rights of tens of millions around the world are subject to unilateral coercive measures, the needed attention has not been given to these crime and genocidal mass violation of human rights, Zareian said.

He added, "Is there any way that the innocent victims of unilateral coercive measures be heard, and their sufferings be redressed and compensated?"