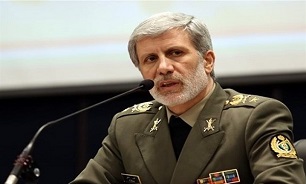 Speaking at a televised program on Sunday night, General Hatami said the termination of the UN arms embargo on Iran on the fifth anniversary of adoption of the JCPOA allows the Islamic Republic to begin arms trade.

Iran’s sale of weapons will exceed the purchases, he said, adding that negotiations have been held with many foreign countries since last year.

Highlighting Iran’s advances in the production of ground ordnance, artillery, military ships, and submarines, the minister said the Islamic Republic is among the world’s top five or six powers in the drone technology.

Defense products made in Iran are efficient and sold at reasonable prices, he said.

The UN arms restrictions on Iran were terminated on Sunday five years after adoption day of the JCPOA in accordance with UNSC Resolution 2231.

The administration of US President Donald Trump suffered an embarrassing loss on August 14 as it failed to renew the Iranian arms embargo through a resolution at the UN Security Council.