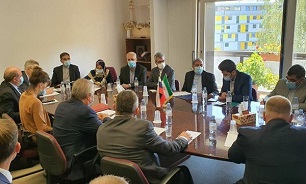 uring the meeting on Wednesday, the two sides conferred on the latest developments in Syria, including the political process and the Constitutional Committee, the situation in Idlib, as well as initiatives to resolve the economic and humanitarian issues in the country.

Russian president's special envoy for Syria Alexander Lavrentiev referred to the positive achievements of Iran and Russia regarding their cooperation in Syria, both bilaterally and in the framework of the Astana Peace Process, and stressed the need to strengthen consultations and collaboration between the two sides at various political and field levels.

He appreciated the progress made in the meetings of the Constitutional Committee and expressed hope that the committee would be able to continue its activities until the final result are achieved.

Lavrentiev also criticized some countries for their failure to pave the way for the return of the refugees.

Khaji, for his part, described the Astana Peace Process as the most significant procedure to resolve the political crisis in Syria, and noted that the Islamic Republic of Iran supports the works of the Constitutional Committee

He also welcomed the expansion of relations between Iran and Russia especially in the field of humanitarian issues and the return of peace to Syria.

In a relevant meeting last month, Khaji and UN Special Envoy for Syria Geir Otto Pedersen underlined political means as the way to reach a final solution to the Syrian crisis.

They emphasized on achieving a final solution through respecting Syria’s national sovereignty and territorial integrity.

Both diplomats voiced their support for strengthening of the political trend and the continuation of cooperation with the Syrian Constitutional Committee.

Pederson and Khaji urged the international community to help the Syrian people given the tough humanitarian conditions in the country.