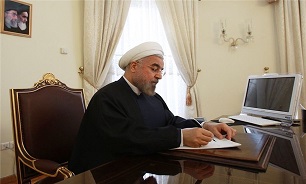 In a Saturday message to Turkish President Recep Tayyip Erdogan, Rouhani expressed deep sympathy with the neighboring country over the deaths and injuries in the quake that struck Turkey’s Aegean city of Izmir on Friday.

He also voiced the Iranian government’s readiness to provide whatever assistance and disaster relief necessary for the people of Turkey, hoping that calm would return to the quake-stricken regions immediately.

At least 27 people were killed in Turkey and two in Greece on Friday when a powerful earthquake shook the Aegean, collapsing buildings and reportedly trapping people under rubble.

The earthquake struck with a magnitude up to 7.0, was felt in Athens and Istanbul, and triggered a mini-tsunami on the Greek island of Samos, where a teenage boy and girl were killed.

Turkish officials said more than 800 people were injured by the earthquake.