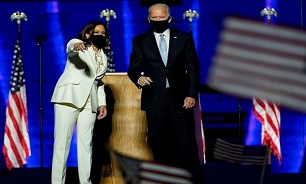 Harris, 56, the first woman and first woman of color to be elected vice president, was first to take the stage, savoring the solo moment in a suffragette-white pantsuit, waving to the crowd and smiling broadly as she approached the lectern.

She began with a tribute to the late congressman and civil rights icon John Lewis, giving a nod to those who paved the way for a more representative democracy.

"Congressman John Lewis before his passing wrote 'Democracy is not a state, it is an act.' And what he meant was that America's democracy is not guaranteed. It is only as strong as our willingness to fight for it," Harris said. "And when our very democracy was on the ballot in this election -- with the very soul of America at stake and the world watching -- you ushered in a new day for America."

She went on to thank the voters, organizers, poll workers and activists who she said delivered a clear message in what became a referendum election, choosing, she said, "hope and unity, decency, science, and yes, truth!"

"You chose Joe Biden as the next president of the United States. And Joe is a healer, a uniter, a tested and steady hand. A person whose own experience of loss gives him a sense of purpose that will help us as a nation reclaim our own sense of purpose," Harris said, talking up her former opponent and now partner, ABC News reported.

The daughter of Indian and Jamaican immigrants, Harris also thanked her late mother and the generations of women before her -- "including the black women who are often, too often overlooked but so often prove they are the backbone of our democracy."

"When she came here from India at the age of 19, she maybe didn't quite imagine this moment," Harris spoke of her mother, an Indian immigrant. "But she believed so deeply in an America where a moment like this is possible, and so I am thinking about her and about the generations of women, Black women, Asian, white, Latina, Native American women, who throughout our nation's history, who paved the way to tonight, women who fought and sacrificed so much for equality and liberty and justice for all."

She gave credit to Biden for helping her ascend to the second highest office in the US and said she hopes her place on the stage will inspire others to follow.

"What a testament it is to Joe's character that he had the audacity to break one of the most substantial barriers that exists in our country and select a woman as his vice president," Harris said.

"While I may be the first woman in this office, I will not be the last. Because every little girl watching tonight sees that this is a country of possibilities," she added.

Biden, after nearly 50 years in public and three tries for the White House, then took the stage and squarely focused on healing a divided nation -- but first took a moment to tout his history-making win.

"Folks, the people of this nation have spoken," Biden said to cheers and honking horns. "They've delivered us a clear victory, a convincing victory, a victory for us, the people. We've won with the most votes ever cast on a presidential ticket in the history of the nation -- 74 million."

Speaking to several hundred supporters in the parking lot of the Chase Center, standing and cheering amid their cars and waving giant and small American flags, Biden walked out -- as he always does -- to Bruce Springsteen’s “We Take Care of Our Own" and expressed surprise at celebrations taking place across the country.

“What I must admit has surprised me, tonight we're seeing all over this nation, all cities in all parts of the country, indeed across the world, an outpouring of joy, of hope of renewed faith in tomorrow, bring a better day. And I'm humbled by the trust and confidence you've placed in me,” Biden said.

The president-elect acknowledged that bringing the nation together, given all Americans have been through, will be a daunting and unprecedented challenge.

"I pledge to be a president who seeks not to divide but unify. Who doesn't see red states and blue states, only sees the United States," Biden said. "I sought this office to restore the soul of America, to rebuild the backbone of this nation, the middle class, to make America respected around the world again, and to unite us here at home."

"It's the honor of my lifetime that so many millions of Americans have voted for that vision. And now, the work of making that vision is real, it's a task -- the task of our time," he continued.

Biden thanked the coalition his campaign put together to bring him to this moment, calling it the broadest and most diverse movement in history, and paid special acknowledgement to the demographic that has historically led him to victory.

"Especially in those moments when this campaign was at its lowest ebb, the African American community stood up again for me," Biden said, pounding his first on the lectern. "You always had my back, and I'll have yours."

Biden addressed President Trump only once and indirectly in his remarks, noting he, too, had lost several times before making history in 2020.

Saying he would win the "battle of the soul of nation," Biden quoted the Bible, defining the next chapter as the "time to heal."

He turned to the raging COVID-19 pandemic, pledging to get the virus under control, and said on Monday he would announce a task force of experts and scientists to oversee his administration’s efforts to stop its spread.

Invoking his Catholic faith, Biden shared a hymn he said he'd thought about in the last days of his campaign that is personal to him and his late son Beau, who died of a brain tumor in 2015 at age 46.

"It captures the faith that sustains me and which I believe sustains America," Biden said. "'And he will raise you up on eagles' wings, bear you on the breath of dawn, and make you to shine like the sun and hold you in the palm of his hand.' And now together on eagles' wings, we embark on the work that God and history have called us to do -- with full hearts and steady hands, with faith in America and in each other, with love of country, a thirst for justice.

"Let us be the nation that we know we can be. A nation united, a nation strengthened, a nation healed," Biden said in closing. "Spread the faith. God love you all. May God bless America and may God protect our troops. Thank you."

Following the victory speeches, illuminated drones spelled out "46" -- representing Biden as the incoming 46th president of the United States -- against a backdrop of fireworks. Viewers from across the country were projected onto screens and buildings as a part of a virtual stage, highlighting the campaign’s decision to stress and focus on social distancing.

Outside the Chase Center in Delaware, where Biden, 77, was first elected to the US Senate 48 years to this date, ecstatic supporters had gathered hours earlier to celebrate as people were around the country.

In rows of cars -- most tagged with Biden-Harris merchandise -- they honked their horns as the pair to took the stage in their first joint appearance, reminiscent of the trademark drive-in rallies they'd held before.

Many took to the tops and hoods to get a better view of the historic moment.

When spouses and other family members took the stage, it was another history-making moment as Doug Emhoff, Harris' husband, is slated to become the first-ever second gentlemen.

Their families joined together to celebrate the moment they -- and 75 million Americans and counting -- had been waiting for.