TEHRAN (defapress) – A senior adviser to the Iranian parliament speaker called on Saudi Arabia to abandon its servile attitude and begin to respect the neighbors instead of trying to get brownie points from the Israeli regime.
News ID: 82520 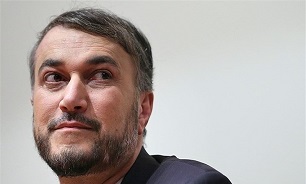 In a post on his Twitter account on Friday, Iranian parliament speaker’s adviser for international affairs Hossein Amir Abdollahian said the king of Saudi Arabia, whose country has invaded Yemen and has supported the US-created ISIS terrorists in Iraq, Syria, Lebanon and Yemen, has no right to level accusations against the Islamic Republic of Iran.

“Riyadh had better stop pleasing the Israeli regime and respect the neighbors,” he added.

“Iran is always the main supporter of peace and security of the neighbors and the region,” Amir Abdollahian underlined.

His comments came after Saudi Arabia’s King Salman bin Abdulaziz Al Saud urged the world on Thursday to take “a decisive stance” to address what he called efforts by Iran to develop nuclear and ballistic missile programs.

The 84-year-old Saudi ruler also accused Iran of interfering in other countries and fanning the flames of sectarianism.

Saudi Arabia and a number of its regional allies launched the devastating war on Yemen in March 2015 in order to bring former president Abd Rabbuh Mansur Hadi back to power and crush the Houthi Ansarullah movement.