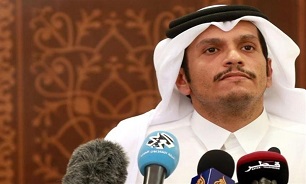 "I think it's better to have a united (Arab) front to put the interests of the Palestinians (first) to end the (Israeli) occupation," Qatar Foreign Minister Sheikh Mohammed bin Abdulrahman Al-Thani told the online Global Security Forum, Reuters reported.

He said division was not in the interest of concerted Arab efforts to get the Israelis to negotiate with the Palestinians and resolve the decades-long conflict between the sides.

However, for the states who established ties, "it is up to them at the end of the day to decide what is best for their countries", he said.

Palestinians, who seek an independent state with Jerusalem al-Quds as its capital view the deals as betrayal of their cause.

Palestinian President Mahmoud Abbas protested the normalization deals with Israel, saying they will be fruitless as long as the United States and the Israeli regime do not recognize the rights of the Palestinian nation and refuse to resolve the issue of Palestinian refugees.