TEHRAN (defapress) – Iran’s Foreign Ministry spokesman dismissed as ‘yellow journalism’ a report by the New York Times about efforts by the Iranian diplomats for the unconditional return of the US to the 2015 nuclear deal.
News ID: 82594 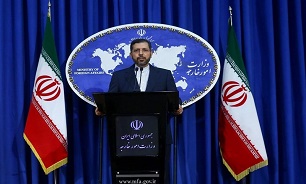 Some media are pursuing a common method, particularly under the current circumstances, to resort to yellow journalism, Saeed Khatibzadeh said on Friday.

His comments came after the New York Times reported on Tuesday that Biden had promised to move quickly to rejoin the nuclear deal, so long as Iran also comes back into compliance.

The paper claimed that Iran’s Deputy Foreign Minister for Political Affairs Abbas Araqchi had “tried to pass on to Mr. Biden’s advisers through intermediaries Tehran’s insistence that the United States return to the Iran deal unconditionally before any talks resume.”

The advisers have not confirmed receiving any messages from Iran, the Times said, and they will only deal with the issue after Biden’s inauguration.

Khatibzadeh said it was a “totally fake” report and that the paper would continue to circulate more fabricated news from now on.

He noted that Iran’s representative office in New York had denied any kind of “direct or indirect contact” between Iranian and American diplomats, Press TV reported.

In a tweet on Wednesday, Iran’s Foreign Minister Mohammad Javad Zarif said the US still has the opportunity to honor the UN Security Council Resolution 2231 and pave the way for its return to the 2015 nuclear deal, from which the outgoing US president withdrew in 2018.