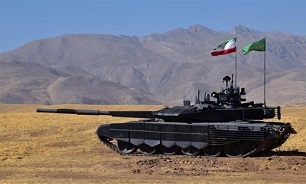 As the commander informed a number of Karrar tanks were delivered to the armored units of the Ground Force to be tested and evaluated before being used by the Force in operations.

"After passing the testing and evaluation stages, the tank will be provided to the Ground Forces in large numbers," he said.

Karrar, a class of Iranian tanks with modern technologies, was unveiled in March 2017 and was delivered to the Army Ground Forces to be used by the forces, in 2018.

Iran’s former defense minister, Brigadier General Hossein Dehqan, had described Karrar as one of the most advanced tanks in the world that can fully satisfy the needs of the country’s armed forces.

Karrar tank is equipped with an electro-optical fire control system, laser rangefinder, ballistic computer, and ability to fire at fixed and mobile targets during daytime and at night.

It is capable of firing highly-precise laser-guided missiles and can be operated by the gunner and commander from two parallel sites. It also is capable of moving through pits, rivers, underwater. It is equipped with a navigation system that can be displayed for the tank driver.