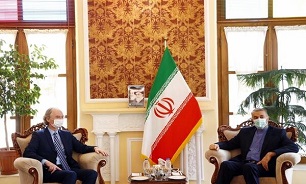 Hossein Amir-Abdollahian made the remarks in his meeting with the UN Special Envoy for Syria Geir O. Pedersen on Monday.

During the meeting, Amir-Abdollahian said, "The Islamic Republic of Iran welcomes the efforts of the United Nations and its measures to help preserve Syria's territorial integrity, national sovereignty and the return of lasting security to this country."

"Unfortunately, some dangerous terrorist groups are trying to get removed from the UN blacklist of terrorists by changing their names, so adopting an impartial UN approach and not witnessing double standards is of great importance for the Islamic Republic of Iran," he added.

"We believe that in the work of the Constitutional Committee, all parties are responsible and should be held accountable," Amir-Abdollahian highlighted, adding, "Blaming the Syrian government is in conflict with the policy of neutrality."

He called the imposition of sanctions on Syria, especially in the areas of medicine, medical equipment and food, cruel, stressing the need to take action to lift sanctions.

He went on to say, "Iran continues to defend Syria and its security in the region with great power," adding, "Tehran supports the UN's constructive efforts to assist Syria and emphasizes impartial judgment on Syria."

Referring to the measures taken in the last 10 years to establish peace and security in Syria, Pedersen, for his part, said, "The political process is on a relatively good track, but the atmosphere of mistrust between the various groups in Syria still hinders the progress of the political process."

"We need the help of all parties, neighboring countries and international organizations to get out of this stalemate," he said referring to the sensitive situation in Syria and the existence of some differences of opinion in this country.

"Unfortunately, the economic situation of the Syrian people is getting worse every day," he noted.

Appreciating Iran's constructive actions in the fight against terrorism in Syria, as well as its humanitarian aid and support for the return of Syrian refugees and displaced persons to their homes, he said, "We must take the situation of human rights and refugees very seriously in Syria."

"We are aware of the situation in the region and will continue our relentless efforts to help Syria," he stressed.

On Sunday, Pedersen, who is visiting Tehran with a delegation for talks with the Iranian officials, held a meeting with Iranian Foreign Minister Mohammad Javad Zarif.

During the meeting, Zarif stressed the need to lift oppressive and unjust sanctions against the Syrian government and people, especially in the period of the coronavirus pandemic.