TEHRAN (defapress) – Chief of General Staff of Iranian Armed Forces said that terrorist groups and the commanders and perpetrators of the assassination of Mohsen Fakhrizadeh should be aware that severe revenge awaits them.
News ID: 82655 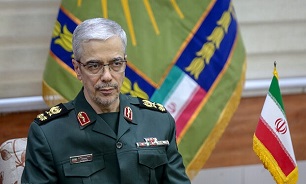 "Once again, the terrorists affiliated with the global arrogance and the evil Zionist regime, in a brutal act, martyred one of the country's scientific, research and defence field managers," said Major General Mohamad Hossein Bagheri in a message issued on Friday over the assassination of Iran nuclear scientist Mohsen Fakhrizadeh.

"The assassination of this valuable manager, although inflicted a blow to the country's defence complex, enemies should know that the path started by these scientists will never be stopped," he added.

"Terrorist groups and the commanders and perpetrators of the assassination of Mohsen Fakhrizadeh should be aware that severe revenge awaits them," he stressed.

Iranian nuclear scientist, Mohsen Fakhrizadeh-Mahabadi, was martyred in a terrorist attack on Friday.