Enemies not to stop plotting against Iran

TEHRAN (defapress) – Stating that the enemies will not stop plotting against the country, Hossein Amir-Abdollahian said the nuclear scientist assassination shows the US-Zionist effort to continue to hit the advancement of science in Iran.
News ID: 82656 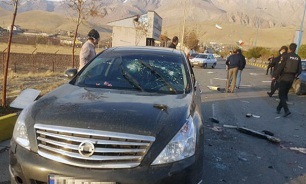 In a tweet on Friday, Iranian Parliament Speaker's Special Aide for International Affairs Hossein Amir-Abdollahian wrote, "The assassination of Iranian nuclear scientist, Mohsen Fakhrizadeh, who played an important role in expanding the country's knowledge, shows the US-Zionist effort to continue to hit the advancement of science and technology in the Islamic Republic of Iran."

"The enemies will not stop plotting. Trusting the enemy is optimism," he added.

Iranian nuclear scientist, Mohsen Fakhrizadeh-Mahabadi, was martyred in a terrorist attack on Friday.