TEHRAN (defapress) – A military aide to the Leader of the Islamic Revolution said Iran will make the terrorists who are behind the assassination of its nuclear scientist regret their act.
News ID: 82658 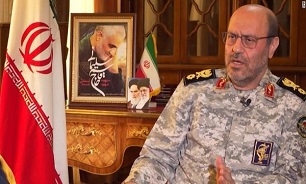 Brigadier General Hossein Dehghan reacted to the martyrdom of prominent physicist, Mohsen Fakhrizadeh-Mahabadi, who was assassinated by terrorists on Friday, saying, “The Zionists, in the last days of their gambling ally, are making every effort to ignite an all-out war by putting pressure on Iran.”

“We will come upon the killers of this innocent martyr like a thunder and make them regret what they did,” he added.

According to the Public Relations office of the Ministry of Defense, Fakhrizadeh-Mahavadi was attacked during an armed clash between his bodyguards and unknown assailants in Absard city of Damavand County, Tehran province, on Friday.

He was martyred despite intensive treatment at the hospital.