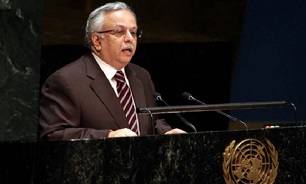 While Saudi Arabia is the only Arab neighbor that has not officially condemned the terrorist attack against the Iranian physicist, the country’s UN representative, Abdullah bin Yahya Al-Moallemi, called on Iran to exercise restraint and do not take any action in response to the heinous move.

“Targeting any Muslim scientist will harm the whole Muslim Ummah,” he said on Tuesday but claimed that an emotional reaction will not bear positive results.

The Saudi diplomat seized the opportunity to use the issue for continuing the blame game on Iran’s peaceful nuclear activities, saying, "We urge Iran to demonstrate its goodwill to the international community over its nuclear program so that it does not endanger its children and scientists in this way.”

However, he did not refer to Saudi Arabia’s clandestine nuclear activities that have recently drawn the attention of the global community.

Claiming that Riyadh’s policies have always been in line with maintaining peace and stability in the region, Al-Moallemi labeled Iran’s missile program as “corruptive”.

The Saudi envoy also criticized Iran’s decision to increase the level of uranium enrichment in response to the lack of commitment by the European parties to the JCPOA and the assassination of its prominent scientist.

Iranian Parliament is working on a counteractive plan, which aims to counteract unilateral sanctions imposed on the Islamic Republic by Western countries, topped by the United States. The plan has been put on top of the agenda following the assassination of Fakhrizadeh.