Official: Morocco’s Compromise with Zionist regime “Stab in Palestine’s Back”

TEHRAN (Defapress) - Iranian Parliament Speaker’s Special Aide for International Affairs Hossein Amir-Abdollahian said Morocco's normalization of ties with Israel was a dagger in the back of Palestinian Resistance, emphasizing that there will be no place for the Zionist regime in the future of the region.
News ID: 82746 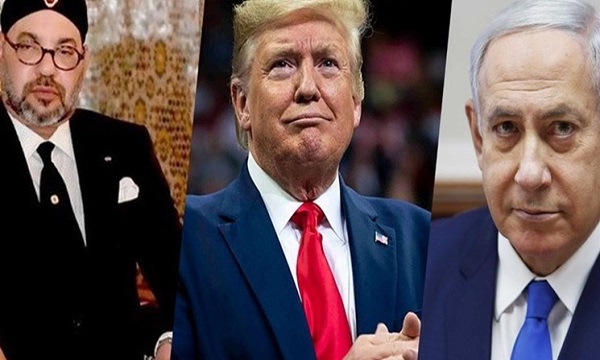 “Morocco's announcement of normalizing relations with the fabricated and occupying regime of Israel is treason and thrusting dagger into the body of the Palestinian Resistance,” Amir- Abdollahian said in a message on Friday, stressing that Israel will have no place in the future of the region.

Morocco and Israel reached a US-brokered agreement on normalizing relations, making Morocco the fourth Arab country - after the United Arab Emirates (UAE), Bahrain and Sudan – to agree to a normalization deal with the Tel Aviv regime since August.

US President Donald Trump tweeted on Thursday that “Israel and the Kingdom of Morocco have agreed to full diplomatic relations”, claiming that agreement would be “a massive breakthrough for peace in the Middle East!” presstv reported.

The White House said in a statement that Trump sealed the agreement in a telephone conversation with Morocco’s King Mohammad VI. It quoted the Moroccan king as saying that the agreement aimed to resume “diplomatic relations between Morocco and Israel and expand economic and cultural cooperation to advance regional stability”.

As part of the agreement, Trump who is due to leave office on January 20 agreed to recognize Morocco’s "sovereignty" over the contested Western Sahara region.

Morocco annexed the vast Western Sahara region, a former Spanish colony, in 1975 and has since been in conflict with the Algeria-backed Polisario Front, a movement that seeks to establish an independent state in the territory and end Morocco’s presence there.

The West African Arab country is currently in control of 80 percent of the region, including its phosphate deposits and fishing waters.

The American president “reaffirmed his support for Morocco’s serious, credible, and realistic autonomy proposal as the only basis for a just and lasting solution to the dispute over the Western Sahara territory,” said the White House statement.

It stressed that as such Trump “recognized Moroccan sovereignty over the entire Western Sahara territory”.

Under the agreement, Rabat will establish full diplomatic relations and resume official contacts with Tel Aviv and grant it overflights. It will also direct flights to and from Israel for all Israelis.

“They are going to reopen their liaison offices in Rabat and Tel Aviv immediately with the intention to open embassies. And they are going to promote economic cooperation between Israeli and Moroccan companies,” Reuters quoted White House senior adviser Jared Kushner as saying.

Separately, Morocco’s royal court said in a statement that the king had told Palestinian President Mahmoud Abbas in a phone call earlier in the day that Rabat would stand by a so-called two-state solution to the Israeli-Palestinian conflict.

“It is a political sin that does not serve the Palestinian cause and encourages the occupation to continue to deny the rights of our people,” Hamas spokesman Hazem Qassem told AFP, referring to the Israeli regime.

The Palestinian president has lambasted the three earlier normalization agreements in the strongest terms.

The provocative normalization agreements between Israel and three Arab countries – the UAE, Bahrain and Sudan – have already sparked outrage among the Palestinians who view the agreements as stabs on their back and a betrayal of their cause.

Meanwhile, a representative of the Polisario Front independence movement for Western Sahara said it "regrets highly" a US decision to recognize Moroccan sovereignty over the territory, Reuters reported, adding the decision was "strange but not surprising".

"This will not change an inch of the reality of the conflict and the right of the people of Western Sahara to self-determination," the Polisario's Europe representative Oubi Bchraya said, adding that the front will continue its struggle.