TEHRAN (Defapress) - The Chairman of the General Staff of the Iranian Armed Forces believes that creating a common defense industry can improve Muslims' unity in the world.
News ID: 82776 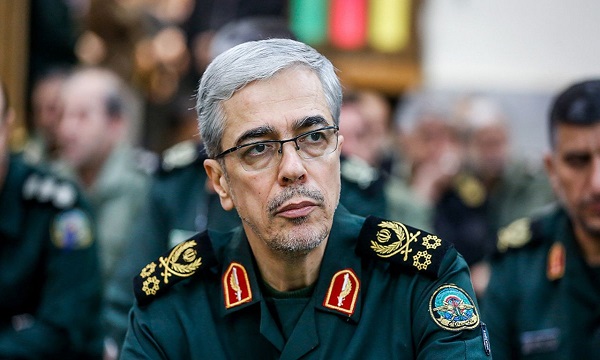 Major General Mohammad Baqeri said on Thursday that the Islamic World with its geopolitical and geostrategic position as well as natural and human capacities and resources has numerous capabilities to become a world-class power in the global geopolitical system.

Addressing the Sixth Congress of Muslim Geographers held online on Thursday, he added that the valuable goal of this congress is of special and extraordinary importance to the geographers of the Islamic world as the scope and definition of geography goes far beyond the mere description and analysis of natural and human phenomena.

Islamic world holds some two-thirds of the world's fossil energy resources, the most important straits essential for the world maritime trade and attractive markets, Bagheri said, noting that they should make optimal use of the assets.

He asserted that establishing a common defense industry would improve Muslims' unity.

Calling on the Islamic countries to iron out differences and move toward a political coalition to demand a permanent status for the Islamic world in the UN Security Council, he said that they should set up joint Islamic banks and joint trade market exchanging goods with preferential tariffs and create Islamic world's media and radio and TV unions