TEHRAN (Defapress) - Iranian Judiciary Chief Seyed Ebrahim Rayeesi on Wednesday described outgoing US President Donald Trump as the number one culprit in the terrorist attack on Iran's leading anti-terror Commander Lieutenant General Qassem Soleimani, stressing that the US president may not escape punishment on the pretext of political immunity.
News ID: 82831 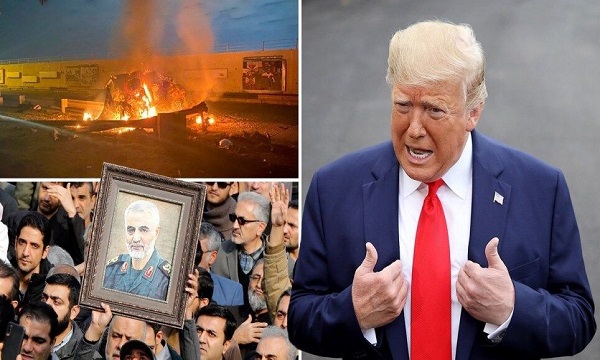 “Trump is the number one criminal in the assassination of martyr Soleiamni, who has admitted to the crime before the world people and he may by no means be seen immune to punishment for this act,” Rayeesi said.

He referred to the US claims of immunity because of its legal status, and underlined that the US officials could no way escape investigation into this crime and "they should account for their crime of assassinating martyr Soleimani".

Rayeesi said that necessary mechanisms have been established to follow up the case through legal and criminal courts and channels.

He stressed the need for a serious prosecution of the perpetrators of the terror attack, noting that there are enough documents to pursue the case and demand punishment for the masterminds and perpetrators of this heinous crime.

Secretary of Iran's High Council for Human Rights Ali Baqeri Kani announced on Monday that the country has identified and is prosecuting 48 individuals for masterminding and conducting the last year terror attack on General Soleimani.

“48 suspects have been identified in connection with the case of martyred General Qassem Soleimani and necessary measures have been adopted to prosecute them,” Baqeri said.

He added that Iran has asked for information and documents with regard to this attack from all the countries which have been one way or another connected to this terrorist crime.

“The latest country was Germany; and we have received reports and information that the Americans’ base (Ramstein) in Germany has been involved in exchange of information between the US drones used in the assassination of martyr Soleimani,” Baqeri said.