TEHRAN (Defapress) - In the first stage of the “Eghtedar 99” drill of Army Ground Forces, a joint airborne brigade offensive operation was carried out on the Makran coast using a variety of weapons and mechanized equipment.
News ID: 82910 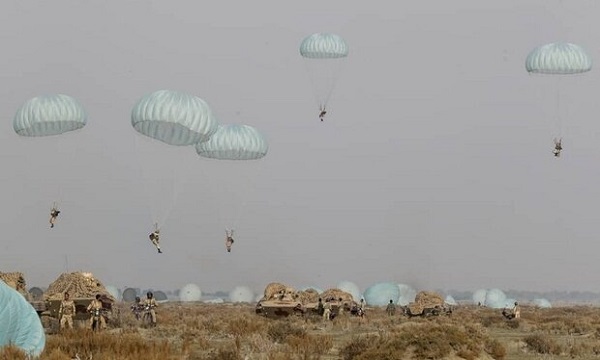 The spokesperson of the “Eghtedar 99” drill of Army Ground Forces Brigadier General Kioumars Sharafi made the announcement on Tuesday, saying that in the first stage of the exercise, the 55th Airborne Brigade of the Army Ground Forces performed parachuting operations using BMP2 personnel and carriers carried out offensive operations plans.

The airborne forces, in the form of hundreds of paratroopers, landed at designated points during a pre-determined operation by several C-130 Army Air Force aircraft, he added.

He noted that simultaneously, they attacked targets on the shores using the airdropped weapons and military equipment, including motorcycles, 107 mm rocket launchers and 23 mm cannons in the area of the drill.

The use of upgraded personnel carriers by the airborne forces, the invasion operation using and supporting a variety of weapons, the capture of coastal areas, the airdrop of armored equipment and semi-heavy weapons in the shortest possible time and the implementation of operations consistent with real scenes are among the strong points of Airborne Brigade of the Army Ground Forces at this stage of the exercise.

The drill is underway along the Makran coasts, along the Sea of Oman, with the participation of airborne units, special forces and rapid reaction brigades, and the presence of Army Chief Commander Major General Abdolrahim Mousavi, Army Ground Force Chief Brigadier General Kiumars Heidari and other senior military officials.