TEHRAN (Defapress) - Referring to the inauguration of the center for manufacturing solid fuel, Iran’s Defense Minister said that it can effectively increase the range and speed of surface-to-surface anti-tank missiles and low altitude air defense.
News ID: 82985 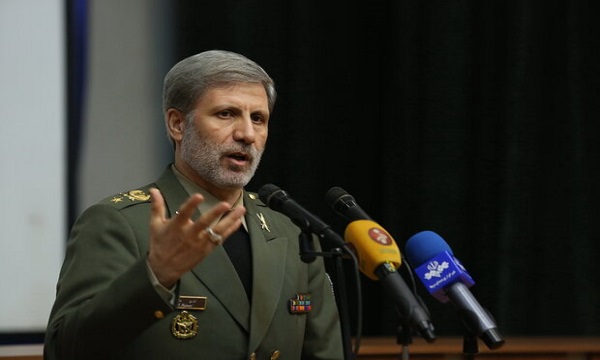 Brigadier General Amir Hatami made the remarks in the inauguration ceremony of the production lines of man-portable missiles and the center for manufacturing solid fuel on Saturday.

"In the hard conditions of sanctions, Defense Industries Organization has been able to take valuable steps in designing, building and producing various types of defense and weapons achievements of the Armed Forces by planning, cohesion, management and relying on completely indigenous knowledge and technology," he said.

"Relying on astonishing knowledge and advances, the Ministry of Defense and defense industry experts have proven that they are able to produce and supply almost all the defense needs of the Armed Forces, including the Army of the Islamic Republic of Iran, the Revolutionary Guards and the police, in the shortest possible time," the minister added.

Hatami highlighted, "Today, no power in the world dares to encroach on our homeland due to the rich readiness of the armed forces."

Stating that the mass production line of advanced shoulder-launched missiles was opened today, he said, "The monopoly on the production of such advanced missiles is only in the hands of a few countries in the world, and today the Ministry of Defense has been able to localize these missiles and mass-produce them."

"The production line of air defense shoulder-launched missiles is, in fact, one of the most sophisticated and effective weapons against individuals and low-altitude enemy targets," Hatami noted.

"The sophistication of shoulder-launched missiles technology is important in that it is simple to use by combat forces, despite the high level of technology," defence minister said.

Such air defense shoulder-launched missiles are equal to the most modern shoulder-launched missiles in the world in terms of technology and tactical capability and are even superior to foreign models in some components, he added, "The systems used in these missiles are completely indigenized and in such a way that it can produce and supply various products from its production lines according to the type of threats and the needs of the armed forces."

In a ceremony on Saturday, two projects were inaugurated with the presence of Chief of Staff of Iran's Armed Forces Major General Mohamad Bagheri and Defense Minister Brigadier General Amir Hatami.

The projects are the mass production line of advanced shoulder-launched missiles and also, centers for producing solid fuel to meet the demands of ground forces’ missiles.