TEHRAN (Defapress) - Iranian Parliament Speaker said that the Islamic Republic of Iran and the Russian Federation are thinking of a 20- and 50-year cooperation.
News ID: 83003 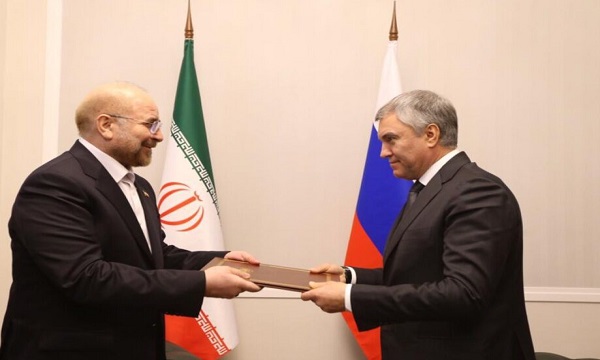 Speaking in an interview with Russia-24 TV Network on Tue., Mohammad Bagher Ghalibaf pointed to the positive trend of political and security cooperation between Iran and Russia and reiterated that Tehran and Moscow are thinking of long-term cooperation in various fields.

In his last day of his visit to the Russian Federation, Ghalibaf described the cooperation between Tehran and Moscow in the political-security fields and trade-economic interactions level ‘satisfactory’ and stated that boosting and enhancing bilateral ties to the strategic level was the main aim behind the visit to Russia.

Elsewhere in his remarks, he pointed to the delivery of message of Leader of the Islamic Revolution to the Russian government and significance of this message and emphasized, “Changes in the US governing body are not a transformative element in Tehran-Moscow relationship, but to enhance the history of positive in Syria, in international forums such as the UN Security Council and IAEA Board of Governors, and economic cooperation within the framework of Eurasian Economic Union (EAEU) to the highest strategic level.”

Changes in the US governing body do affect amicable ties between Tehran and Moscow, he reiterated.

At this critical juncture in the world order, cooperation between Iran and Russia at strategic levels will enhance the position of both countries in international arena, he said, adding, “Iran-Russia strategic cooperation began with the developments in Syria which led to the elimination of terrorism from the region, and this cooperation can be expanded in other areas.”

Turning to Iran’s nuclear deal, JCPOA, Ghalibaf said, “We have received various signals from the US officials at the US President Biden’s administration. Although Islamic Republic of Iran has not seen any new policy from them (US) and it seems that Biden administration does not have the power to make big decisions.”