TEHRAN (Defapress) - The Iranian defense minister has said that intervention by powers beyond the region is the root cause of the threats against regional stability.
News ID: 83201 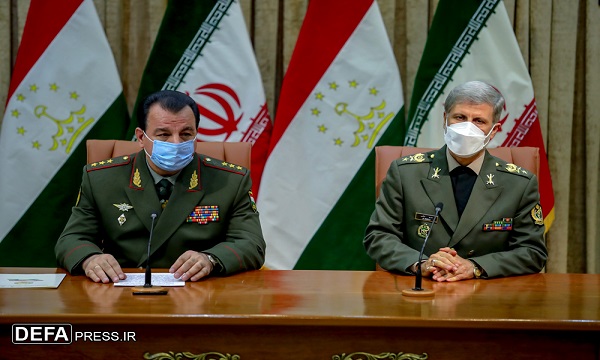 Iran's Minister of Defense Brigadier General Amir Hatami made the comments in a meeting with his Tajik counterpart Colonel General Sherali Mirzo in Tehran on Thursday.

According to the Iranian minister, both Iran and Tajikistan like the entire region are living under the threat of terrorism, adding that threats against regional stability come from beyond the region from the intervention of foreign powers.

Amir Hatami pointed to Iran and Tajikistan's shared cultural similarities, adding that the two nations need to use those commonalities as a platform for expanding cooperation in all areas, especially in the fields of security and defense.

Referring to the good relations between Iran and Tajikistan in the past, the Iranian defense minister said, "Bilateral cooperation between the two countries was interrupted for a while and today we decided to have a fresh start for cooperation, so the expert delegations will be exchanged and these delegations will talk and exchange views and will provide the ground for full cooperation."

He further expressed hope that the visit of the Tajik military delegation will enhance military cooperation between the two sides in the interest of the entire region.

Also in the meeting, Colonel General Sherali Mirzo, for this part, hailed his talks with the Iranian officials during his stay in Tehran in the past three days and said: "In these three days, we had a good meeting and talks with the Iranian Minister of Defense and became familiar with some of the achievements and capabilities of the Armed Forces of the Islamic Republic of Iran."

He further invited his Iranian counterpart Amir Hatami for an official visit to the Republic of Tajikistan at a due time, expressing hope that the two sides' specialized groups will continue talks to increase cooperation in line with the goal of ensuring bilateral and regional security.

It is worth mentioning that at the end of these negotiations, a memorandum of cooperation was signed by the two ministers.

The Minister of Defense of Tajikistan arrived in Iran on Tuesday at the head of a military delegation and also met the Chief of Staff of the Iranian Armed Forces, Major General Mohammad Hossein Bagheri on Thursday morning at the complex of General Staff of the Armed Forces of the Islamic Republic of Iran in the east of Tehran.