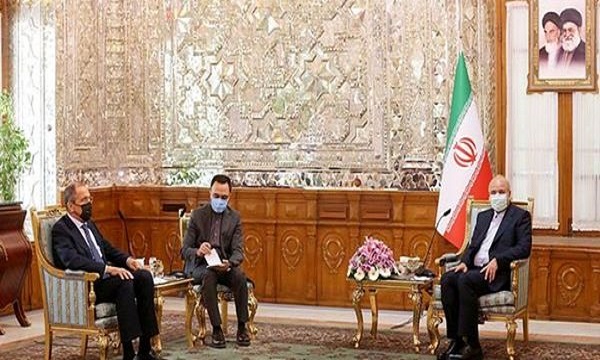 Mohammad Bagher Ghalibaf made the remarks in his meeting with Russian Foreign Minister Sergey Lavrov in Tehran on Tuesday and emphasized that Iranian and Russian foreign ministries should pursue this important issue seriously.

During the meeting, Iranian parliament speaker stressed that in bilateral relations, the two countries should move towards a long-term agreement on joint cooperation in the fields of economy and trade, security and politics, culture and society, science and academia, etc.

The two countries of Iran and Russia enjoy high capabilities and potentials to broaden their ties more than before especially in economic sphere.

Elsewhere in his remarks, Ghalibaf pointed to the Eurasian Economic Union (EAEU) and stated, “EAEU can help promote economic cooperation, and during my visit to Moscow, it was agreed to establish a financial and logistical hub to facilitate bilateral trade relations.”

A significant issue is the close cooperation between the two countries of Iran and Russia in the fight against terrorism and preventing the interference of countries outside the region in the region, he said, adding that bilateral and multilateral cooperation such as Astana Peace Talk and also other regional mechanisms can be very effective in the fight against terrorism, spread of security and stability in the region.

Russian Foreign Minister Lavrov, for his part, pointed to the letter of Iranian Leader penned to Russian President Putin and said: "In this letter, Iran’s initiative was supported by Russia for signing and sealing a comprehensive agreement between the two countries.”

He also pointed to the spread of coronavirus global pandemic and said that more than 500,000 doses of COVID-19 vaccine have been delivered to Iran so far in order to fight against coronavirus. With the coordination made in this regard, Sputnik V vaccine will be produced in Iran soon.

He then pointed to Iran’s nuclear deal, JCPOA and stressed that the key to resolving JCPOA’s problems is full and unconditional return of United States to its obligations under the agreement and implementation of UNSC Resolution 2231.